An ambitious young street magician must undergo a rite of death and rebirth to defeat the guardian of a magical world hidden within our own.

Any comments would be much appreciated. 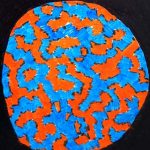 REVISED <after checking the formula>

When his estranged father returns and performs an act of true magic, <12>
an ambitious young street magician <6> must undergo a rite of death and rebirth <8>
to defeat the guardian of a magical world hidden within our own. <12>

I’m not sure about what to name the protagonists FLAW.

“One drink” his father says, “Just one drink”

The Catalyst is when the protagonist goes for one drink with his father and witnesses his father perform at act of true magic.

His father explains why he left and why he returned. After the explanation the protagonist is now in awe of his father. He understands why he left. But the void his father left behind is still a void.

His father offers to fill that void with an ancient magic, long forgotten. The son accepts his fathers offer and then we hit ACT 2.

The description of the opponent as a  guardian carries a connotation that seems to be at odds with his assigned role in the story.  By that I mean the definition of “guardian”  conveys the sense of a benevolent, not a malevolent role.

“Guardian:  one who has the care of the person or property of another.” (Merriam-Webster’s Collegiate Dictionary).

So what threat does the guardian pose to the magic world and to the protagonist? Why MUST a character who seems to be performing a benevolent role(taking the word “guardian” in its normative sense) be defeated?

And what are the stakes?  If the protagonist fails his to defeat him what will he suffer as a result?  And how will the magical kingdom suffer?  What is payoff if he succeeds?  And what boon his victory provide to the magical kingdom?

“When he discovers that his estranged father is a real spellcaster, an ambitious street magician must enter a magical world and defeat its dark lord.”

Problem: the EVENT seems irrelevant to the ACTION. He discovers that his father casts real spells, so he must defeat the guardian of the magical world? What’s the connection? Is the father the guardian?

Probably not. So let’s make it clearer, by slightly changing the EVENT. Rewrite #2:

“When his estranged father reveals himself as a wizard and asks for his help to protect the world, a clumsy street magician must enter a spiritual world and defeat a demon lord planning humanity’s enslavement.”

So, “… must undergo a rite of death and rebirth” and “… defeat the guardian of a magical world hidden within our own” sound too general for some reason.

Also, the “ambitious” characteristic doesn’t pay off. If he is ambitious, he enters this adventure because he sees potential for his own fame. Does he?

His father is a normal guy who discovered something, delved into it, and through trial and error learnt the true nature of it.

His father wants to share it with him, but to do so he must convince his son to undergo the rite and does so with what he knows his son will perceive as real, supernatural magic.

The ending of the story will reveal that it is something much more than magic.

At mid-point the audience will realize this, that the father is actually trying to teach his son something otherwise inexplicable except through the terminology we are familiar with.

His father is a genius but comes across as a douchebag until we start to understand what he’s really trying to share with his son.

Thank you for your comment! You guys make me WRITE. And I love it!

When his estranged father returns and performs an act of true magic,
an ambitious young street magician must undergo a dangerous rite of death and rebirth
to defeat the malevolent creature guarding the source of true magic.

After the rite, the protagonist gains the ability to perceive the magical world in which the guardian exists.

The guardian is a powerful and destructive force tasked to protect the source of true magic from those unworthy of its truth.

Should the protagonist fail in defeating the guardian he will die.

The world of true magic is actually very simple once you become aware of it.

The story is supposed to be simple too.

Thank you for your comment. I hope you will be able to help me further. You and Richiev are super cool and I’d love to say thank you in person some day. A silly sentiment but that’s how I feel about you guys always being here and always helping EVERYONE. LOGLINE IT wouldn’t be what it is without you.

In my book, the most important element a logline needs is a clear, strong, irresistible hook.  Speaking as a potential audience of one, I am intrigued but not yet hooked on the premise in your logline.  I’m a fish swimming around the hook, curious — but not quite tempted to bite.

One reason I’m not yet biting is because it seems to me the logline confuses means with ends.

The ” rite of death and rebirth…” is a standard issue aspect of a Hero’s Journey, but that rite is usually implicit.  And it’s a necessary step, an unavoidable means, toward reaching the  objective goal.  But the rite of passage leading to the defeat of the guardian cannot be the objective goal, the end game of the young magician’s heroic journey.  Rather it is is the High Noon, moment-of-truth event;  it is the “final exam” he will have to pass/survive in order to obtain the ultimate objective goal, that is, the “boon” (Joseph Campbell), the “reward ” (Christopher Vogler).

The battle with the guardian is a means to an end?  What is that ultimate end, the boon, the reward?  It is not evident to me what that ultimate objective goal is.

For stories that are fantastic, other worldly, stories set in the future (Fantasy, Horror, SciFi), I pose another question:  what archetype under girds the story?  What universal, psychological, social and existential motifs from the real world are mapped in the unreal world of the story?  I consider that mapping to be crucial. In order to get an audience to hook into and buy the story world, they must apprehend elements in the story world that are familiar to them in the real world, elements that they can correlate to their own experience.

I look for two archetypal factors:  the kind of Heroic Journey being undertaken and the kind of archetypal character and character arc being evoked.  I presume you are familiar with how the archetypal the Heroic Journey under girds “Star Wars: The New Hope”.  But I wish to draw attention to the particular character and character arc of the protagonist.  Luke Skywalker is being called to become a Jedi Knight, called to fight the evil Empire.  So his character role is that of the Warrior, and the arc is the training he must undergo to become a valiant, heroic Warrior.  That character arc entails certain expectations of where the will begin (farm boy), what he will have to learn (how to use the force) and where he will end his journey (Jedi Master).

I seems to me that the implied character arc for a young magician would be that he starts out as a fumbling Trickster; he doesn’t know how to use magic well, and, worse, he uses it to “have fun”,  work mischief, to amuse himself, advance his own selfish interests.  He must stop being a Trickster, learn how to be a Magician — and his training will be hard every step of the way, not just in the High Noon fight with the guardian

I would like to see a stronger hint of that arc in the logline.  And the most succinct  way to imply his character arc in a logline is by how he is described.  Well, the logline says he’s ambitious.  Okay, that suggests ego inflation and selfishness.  What is he ambitious to do?  At the start of the story, what does he want to do with magic? Acquire power for his own selfish use?  And is he skilled and careful, or unskilled and reckless?

Thank you so much for you wise words of guidance. You have no idea how much your helps means to me.

I recently made a good friend with a screenwriter. He’s written 55 scripts and out of this one was made into a movie. He knows Frank Darabont. He knows Morgan Freeman. He knows Oliver Stone. We had a long talk last night about the film industry today and the conclusion was depressing to say the least.

And yet, I am hopeful because I know my story is important because I have something unique to say.

At this point in time , my story has been fermenting for about 12 years. It has undergone countless adjustments and I am just as excited about it now as I was when I first realized it would make for fantastic watching.

The words “magician” “ambitious” “rite of death and rebirth” are words I am experimenting with in my efforts to make the core of this story work.

My problem is that I’m still unsure about what this story is really about. The story is there. I just don’t know what it is exactly it is that I am trying to say. Talking, writing about it with people like you and my friend is helping me to figure it out and helping me so much understanding what makes a story tick.

I’ve read what you wrote a number of times now. I will read it some more and get back to you with a new Logline. I think that this one is not the right one for my story. I’ve tried a few now but I never share what it’s really about.

The hook is what I am afraid to share. But last night, for the first time in my life, I shared the hook with my friend and he took the bait.

I really enjoy practicing and learning here from guys like yourself, people who speak the structure of story with effortless ease.

I need to go back to the drawing board now. Need to figure out how to write this idea succinctly.

Cheers for now. I’ll be back!

>>The hook is what I am afraid to share. But last night, for the first time in my life, I shared the hook with my friend and he took the bait.

I understand your concern about having your story plagiarized.  I suggest writing a draft of the script that includes the hook and the essential elements of the plot.  It doesn’t have to be a perfect, polished version. Register it with the Copyright Office of the U.S.  After that you will have sufficient legal protection to assert your claim in case of plagiarism.